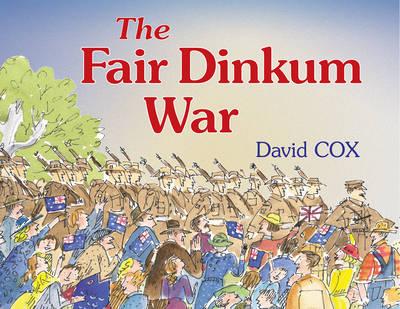 Artist David Cox recalls what it was like to be a child during World War Two, and his warm observations reveal a resilient quintessential Australian spirit. A companion to his much loved picture book The Road to Goonong.

“That morning, something important happened. It began with a great rumble that came in through our classroom window and rumbled on and on. We all ran out into the school yard and hung on the fence and gazed in wonder. An endless line of trucks and jeeps and tanks and weapons carriers came around the corner and along our street, all of them with big white stars on their sides. There were big cannons, too. Soldiers in the trucks waved to us. We wouldn’t have guessed there were so many trucks in the whole wide world. They rumbled right through the morning break and when we came out for lunch they still rolled by. Then they were gone, heading north to where the war was being fought.”

Cox has been able to write and brilliantly illustrate a story that will resonate with anyone who was involved with life as it was for many thousands of Australians during those fraught years.

“What a wonderful storyteller David Cox is!
He tells this story as if he is sitting on a comfy chair right beside you.”

“David Cox also draws on childhood memories to convey a strong sense of how World War II affected Australia from a child’s point of view. There are US troops driving trucks, jeeps and tanks through town, air raid trenches, few cars because of petrol shortages and no chocolate biscuits because of food rations. It’s a world away from life in 2013, but Cox helps children connect through humour.”

‘Fair Dinkum War’ is available to purchase online at the following retailers: