Betty Beath and David Cox live in Brisbane, the capital city of the state of Queensland, Australia. Betty is a well-recognised composer, whose instrumental, vocal and orchestral works have been performed in many countries of the world and are published by Wirripang, Australia and The Australian Music Centre. David is a book illustrator and writer. He is best known for his children’s books. Together, Betty and David have written art songs, children’s opera and a travel book, Spice and Magic. In 1975, they were awarded a travel grant from the Literature Board of the Australia Council, which enabled them to travel extensively in Indonesia, and resulted in Betty’s musical works with an Indonesian influence, David’s children’s books, set in Indonesia, as well as a children’s opera set in Bali. 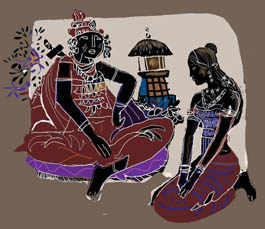 Nawang Wulan, Guardian of the Earth and Rice (1980) voice and piano

According to Javanese legend, Nawang Wulan was a heavenly nymph whose wings were stolen one day while she was bathing. She was compelled to live on earth and to marry Joko Tarub to whom she bore a child. When eventually, she found her wings she returned to heaven, but she promised to come again whenever the child might need her help. In this poem Subagio Sastrowardojo gives her a more general protective role as the guardian of the earth and rice. I love the writing of Sastrowardojo and this was a reason I decided to set the original text which was Bahasa Indonesia.