I like pen and ink as a medium and, mostly I draw directly with the pen, which means I don’t pencil out first, then draw the ink line over the pencil.  There’s nothing wrong with doing that;  but,  for myself,  I find that doing it my way will result  in a line that is  more energetic    It is the end result matters and usually an energetic drawing is what I am looking for..

I am not trying for complete accuracy. I want my drawings to look spontaneous, as though I have just jotted them down while the story is being told, almost as though they are calligraphy, quickly written down.  I also want my illustrations to be lively and to look as though I have enjoyed drawing them. I think readers sense that enjoyment. I like to try out on different types of paper,  with different pens or brushes. For quite some time, for line drawings, I favoured blotting paper as a support.

If a commissioning editor from a publishing house phones me or emails to ask am I available to illustrate a text they intend to publish, I usually say yes; can’t bear to see it slip out of my hands. Once when I said no, the editor told me, ‘You can make time for it at night.’  And I found I could.

Every illustrating job has its own difficulties, though if I like the story, its rhythm and its imagery, my work will be very much easier.  Often the job of illustrating a picture book looks daunting.  I play ‘let’s pretend’ games to get me going. I have done a bit of work in  stage design in my time, for opera and ballet companies, and I do like the theatre, so I like to kid myself that  the picture book is a stage play, that the edges of the page are the proscenium, that I am the director of the play, I am the set and costume designer and I am the actors who play the parts of the story’s characters.

I sketch out the cast: several drawings of each character. I keep drawing and drawing them and draw quickly, like I did in my game of squiggles, until I feel that they begin to come alive in my mind. I try to think of these figures as real little actors.

I have to design their costumes and I have to design the stage-set they will move in. As a director I have to work out their moves on stage.  I act out every part too. If a character chops wood, I get up from my desk and chop  wood, if they ride a horse, I imagine myself in the saddle. If the character is sad, I feel the sadness, if it is happy, I feel happy, shy, I feel shy. Sometimes for the sake of movement, I have my characters dance. It is all a matter of feeling things out and ‘feeling’ is most important; it shows in a drawing. 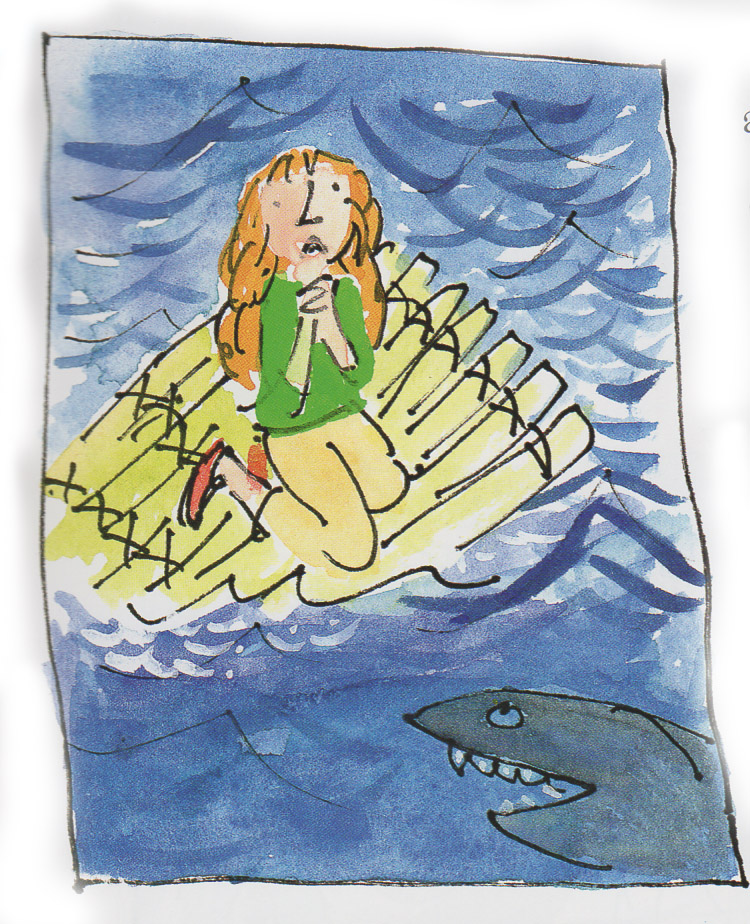 Keeping characters consistent is one of the problems of book illustration: same character, different emotions on every page… and there might be a lot of characters.  I find that my miming game helps in this. Actors say that they ‘get into character’ and that is what I try to do. I have illustrated books with many characters, so I have acted out maybe fourteen parts… it is a matter of feeling. I try to make a game of the job: if it is fun….then it is not so difficult.